Donald Trump’s chart has Leo ascendant; but, upon analysis, putradosha in this rising makes this chart very unlikely. He definitely has Virgo ascendant…. END_OF_DOCUMENT_TOKEN_TO_BE_REPLACED Donald Trump was born on June 14, 1946 at Jamaica Hospital Queens (Queens County), USA at 10:54 am (time zone = GMT −4 hours). Astrologers the world over use this data to compute Trump’s chart—Donald Trump has Leo rising. But a few seconds later, the ascendant shifts to Virgo in the tropical chart. Is it actually possible for Trump’s chart to have Virgo ascendant?

Update: I have substantiated my prediction with the charts of 3 other celebrities obtained from Astro Databank.

The chart computed with tropical zodiac and sidereal nakshatras (as practiced by saptarishis) is given below:

The ascendant is Leo. The Sun is in Gemini and the Moon is in Sagittarius. This is the chart that has been used extensively the world over for astrological analysis. The peculiar point in this chart is that the ascendant will change to Virgo a mere 11 seconds later! Is it possible that the president indeed has Virgo ascendant?

Putradosha denotes a blemish regarding children, specifically, a son. The sages considered the birth of a son was essential to continue the family lineage.

First, let us analyze the chart with Leo rising given above. The Sun is the ascendant lord, and he is in the 11th house. Most importantly, Ketu and the Moon are in the 5th house. The presence of Ketu in the 5th house indicates putradosha.

The presence of the Moon in the 5th house strongly favors the birth of a daughter and not a son. The significator for children (putrakaraka)—Jupiter—also happens to the 5th lord, and he is in the 3rd house. This planetary arrangement is not conducive for begetting children, specifically a son. Also, the 10th lord, Venus, is in the 12th house (of loss); this indicates difficulty in begetting a male child. According to Vedic teaching, the 10th house indicates a son to perform the funeral rites.

Now the facts: Donald Trump has 5 children—3 sons and 2 daughters. Importantly, his firstborn is a son.

While the chart depicted above indicates putradosha, the fact is that Trump doesn’t suffer from putradosha at all!

Can we substantiate this prediction of putradosha in Trump’s chart?

To substantiate the putradosha caused by Ketu, I searched the Astro Databank using the free software, Saptarishis Research Software, using the following criteria, as seen in Trump’s chart:

I could trace the required details for the following celebrities whose astrology data is available in astro.com.

She is a French actress. Her astrology data has AA Rodden Rating (indicating it is very accurate): 15 June 1946 at 09:30 MET h1e (is standard time) Tourcoing, France, 50n43, 3e09. Her ascendant is Leo, and only Ketu and the Moon are in the 5th house, with the 5th lord Jupiter in the 3rd house.
She has only one daughter and no son. 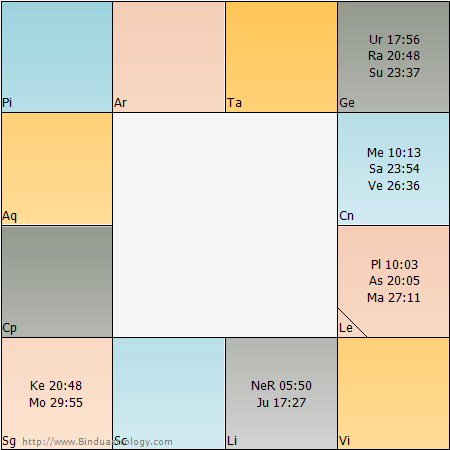 He is an English actor and a singer. His astrology data has A Rodden Rating (indicating it is accurate): 19 April 1946 at 12:00 GDT h1e (is daylight saving time) Cheshire, England, 53n15, 2w30. He has only Ketu and the Moon in his 5th house and Jupiter in the 3rd house.
He is not married and has no children at all. 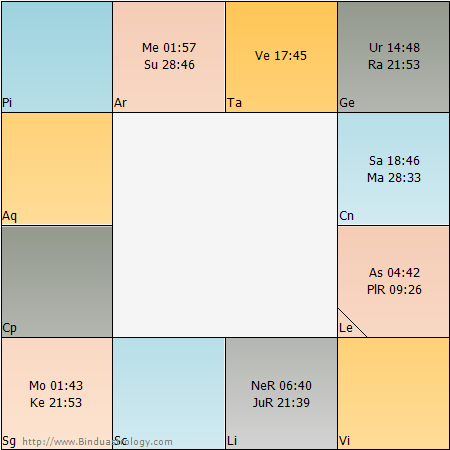 He is a French politician. His astrology data has AA Rodden Rating: 24 February 1946 at 16:00 MET h1e (is standard time) Neuilly sur Seine, France, 48n53, 2e16. He too has the same planetary position with regard to the 5th and 3rd houses.
Interestingly, he has four children, but they all are daughters; he has no son. 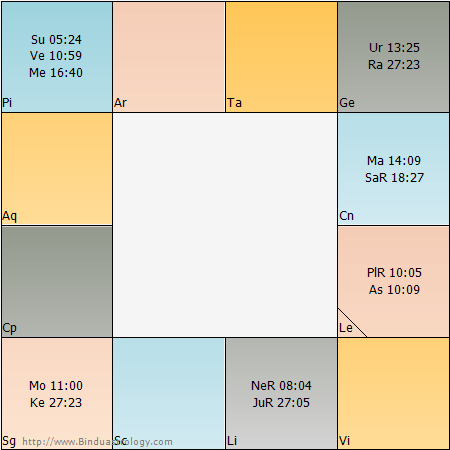 In all the charts depicted above, we see that there are no other planets in the 5th house to influence the putradosha. Certainly, all the three persons do not have a son; they suffer putradosha.

Donald Trump has 3 sons, and therefore he does not suffer putradosha at all. So, the chart with Leo ascendant does not represent him at all. But, what if the chart is off by a few seconds? What if he was born some 15 seconds later but the time was rounded off to 10:54 am?

Let us now consider this possibility. The chart computed with the birth time recorded a mere 11 seconds later has been given below:

Now, the ascendant is Virgo. The Sun is still in Gemini and the Moon is in Sagittarius. Upon analysis, Ketu is not in the 5th house, and therefore he has no putradosha. Indeed, the 5th lord, Saturn, is in the 11th house, which is very good. The putrakaraka, Jupiter, is in the 2nd house—also a good placement. The 5th house is now aspected by Saturn; though this is not good, this is not that bad either to confer putradosha at all. The 10th lord, Mercury, is in the 11th house. Also, Jupiter aspects the 10th house, which boosts the results of that house.

One can also see that the 9th and 10th lords (Venus and Mercury, respectively) are placed together, leading to Dharma karmathipathy yoga. This is a Raja yoga (yoga of a king). But this yoga doesn’t materialize in the previous chart with Leo rising.

We can continue the astrological analysis of this chart further, but the lack of putradosha in the Virgo ascendant chart is very telling. In my opinion, this is highly confirmatory—Donald Trump’s chart has Virgo rising!

I rest my case.